As a trusted supplier of special effects to the 6 Nations, we were asked to attend the official tournament launch event at the Hurlingham Club, near Putney in London. The six Captains would be present for a photoshoot and the client wanted to incorporate special effects as part of the team entries for a BBC broadcast video.

The director wanted to shoot some footage of the trophy in the dark, which meant a very early start in order for us to get to the venue and set up well before sunrise. We were also only given a very limited brief about what was required for the video aspect of the job, which meant we were not sure what to expect and had a short timeline to get the right shots before sunrise.

On arrival we discovered that the director wanted the trophy to be surrounded by flames – large ones in the background and more delicate flames in the foreground – without them overly obscuring the trophy itself.

We got up very early and were onsite for 5am. We’d prepared everything in advance so we were set and ready to film and we’d also brought a selection of effects so that we could be flexible to meet the director’s needs.

The team quickly demonstrated the effects and decided to use flames bars in front of the trophy and single jets behind.

The flame bar creates a half-meter-high wall of fire which was positioned right in front of the camera so the shot looked through the flickering flames and burned throughout the duration of the clip. Behind the trophy, vertical jets of fire intermittently burst through the screen. We also added some long-duration pyrotechnic gerbs to add an extra bit of sparkle to the rear of the image.

As you can see from the video below, the final footage is very powerful and was achieved in only a couple of takes. 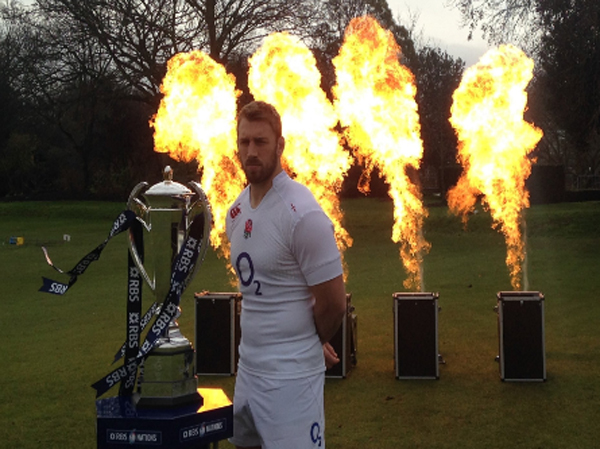