The BRIT Awards is an annual event organised by the British record industry’s trade association, it’s a live production held at the O2 Arena in London and broadcast to millions on ITV. As well as the awards there are a number of live performances from the countries most popular artists and it’s an opportunity for them to showcase their talents. It’s become quite competitive between the artists as to who can create the most spectacular and memorable performance.

Paloma Faith was shortlisted for the Best British Female Solo Artist award and was also due to a complete live performance of ‘Only love can hurt like this’. Paloma’s Management team approached us and presented a detailed mood board showing Paloma’s flamboyant but elegant concept involving a huge rain shower covering the whole stage and Paloma in the centre of it all.

We had produced rain effects for live TV performances before, but nothing on this scale, at such a high-profile event. The key challenges we faced were:

We created a 12m wide light rain shower to cover Paloma’s backing dancers across the whole width of the stage, and a separate box of water which produced a deluge of water to fall on her in the middle of the stage towards the end of the performance.

We had to source extra long hoses as we couldn’t risk any joins near the LED screen and we rigged the equipment in the roof, it was lowered into position in less than two minutes. A water catchment tank was built under the stage, and a steel grate was built into the stage which would allow the water to pass through.

This was then covered so for the other acts and uncovered just for Paloma. We also had to heat thousands of litres of water so that the shock of cold water would not affect the performers.

Nothing short of speculator. We’d had several days of rehearsals but the pressure of a live show can cause all kinds of problems. Everyone loved the performance and Paloma was only upstaged on the night by Madonna falling from the stage. 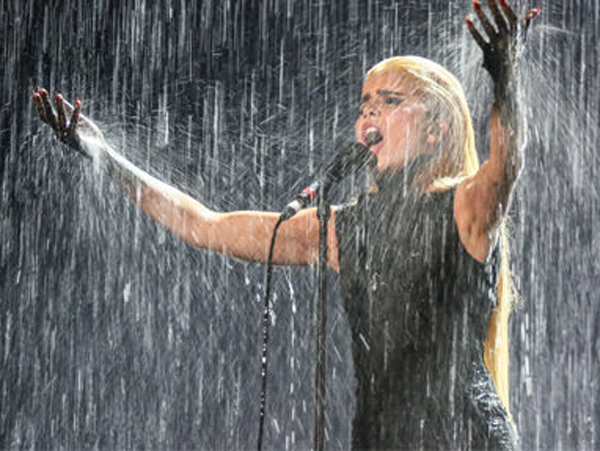