The Rugby League Challenge Cup Final is an event that we have worked on multiple times, along with many others at Wembley Stadium. However, what made the 2020 final quite unique was that it was played behind closed doors and no fans were allowed inside the National stadium.

We all miss sports supporters and live sport is simply not the same without them, but their absence does have a few benefits such as fewer people in the stadium who can enter our safety areas. We’re given extra staff parking at the stadium and there is no delaying in getting home because of the traffic. That being said, COVID-19 restrictions introduced in all stadiums around the country has certainly created a few fresh challenges for us to overcome.

The biggest change has surrounded the creation of a coloured zone system within all the stadiums. Green zones where anyone is permitted, orange where a small number of people can go, and the red zone which is highly restricted. Only a very limited number of people can enter the red zone, which usually encompasses the pitch, players tunnel and changing rooms. To enter the red zone you must have taken and returned a negative test for COVID. Additionally, the red zone often covers areas where we usually operate, so we have had to look for alternative solutions to work within the stadium.

At Wembley for the Challenge Cup Final, this meant we could not position our flames either side of the tunnel, so we instead found a place on the opposite side as shown in the picture below. This issue was relatively simple to overcome but there were two other problems which required a bit more thought.

Firstly, the pyrotechnics which would always be placed on the edge of the pitch – we were not allowed on there.  Instead, we had to move them nearer the stands which meant we were in line with the roof, so we had to consider the height of our products to ensure we didn’t strike the roof or the new P.A. system which was suspended below.

Secondly, we needed to go on the pitch at the end of the match to fire the streamers over the winning team.  How could we do this without having access?

Although each pyrotechnic product comes with specific information about its performance, including the height it can achieve, we didn’t want to rely on this outright so we arranged to complete a site visit and perform a demonstration. The council and venue staff attended and we fired a range of products in different positions and agreed as to which were the most suitable, coming to an agreement that we could proceed.

For the streamers, it was not an option for our team to be given red zone access, so instead we identified two people who did have access and were available to help us during the post match trophy presentation. We arranged that they would meet us at the side of the pitch where the red and orange zones met. We would then pass the streamers across and they would position them for us on the pitch.

We fired flames and pyrotechnics for the team entrance and then relocated them behind the posts so that we could also fire them during the match when the teams scored.

Then at the final whistle, as planned, we met the two people with the red zone access who carefully positioned our streamers behind the podium. Thanks to our wireless firing system, we could safely operate and fire them from the orange zone while maintaining a line of sight to ensure it was safe to fire.

The bonus of the situation was that we were not able to complete the tidy up of all the streamers as this also had to be done by red zone members. 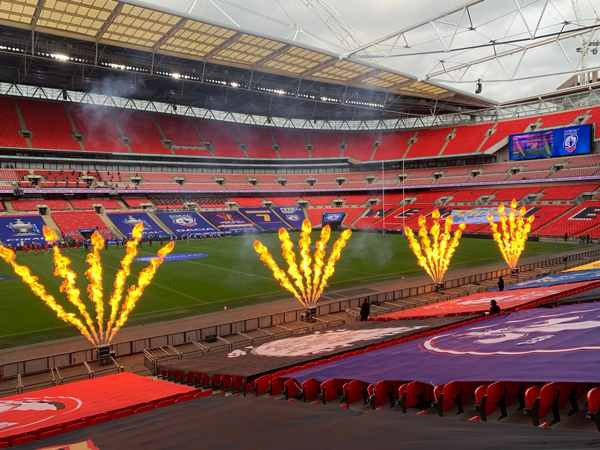