The European Championships is a multi-sport event which was hosted in Glasgow. We provided special effects for the swimming and gymnastic events as part of the competitor entry and medal ceremonies.

Across the events, our team used a range of our Indoor Pyrotechnic effects including Flame Jets, Flame Bars, Sparkulars and CO2 Jets.

The event was meticulously planned, so our team arrived at the venue well prepared for the installation. However, with many events, what happens on the day is not always as expected.

The first challenge we were presented with was the heat of the swimming arena, which was not anticipated. Official guidelines stipulate that the pool must be maintained between 25 and 28 degrees, which creates very hot, humid and uncomfortable working conditions. It also meant that when we had completed our testing, the additional heat given off by the flames made the entrance area very uncomfortable for the athletes.

The second challenge was created at the point of installation when the company hired to brand the floor (‘THE MOMENT’) arrived.. Unfortunately, the branding was placed in the wrong place, meaning that our team couldn’t position the Special Effects products in the agreed positions as they would have obstructed the branding.

We spoke with our client and highlighted the issues so that we could work together on a solution. The original plan was to have the Flame Effects burning for the entire duration of the competitor entrance, but we agreed that we would change this to a number of shorter bursts – one for each team and competitor. Thus, after a quick re-programme, our specialist team were able to accommodate this and agreed the firing cue for each entrance.

The positioning of the products was a little trickier, as the intention had been to create a flame corridor, with two walls of flames extending from the entrance in which the swimmers would walk through. Our space had been halved, so we were quite restricted with what we could achieve. One option was to simply remove some of the effects and do what we’d planned on a smaller scale, but the client wasn’t keen on this.

As a result, we opted to create an arrow shape pointing towards the entrance. As you can see from the photo below, the effect looked fantastic from the aerial cameras and still had the desired effect from poolside cameras. 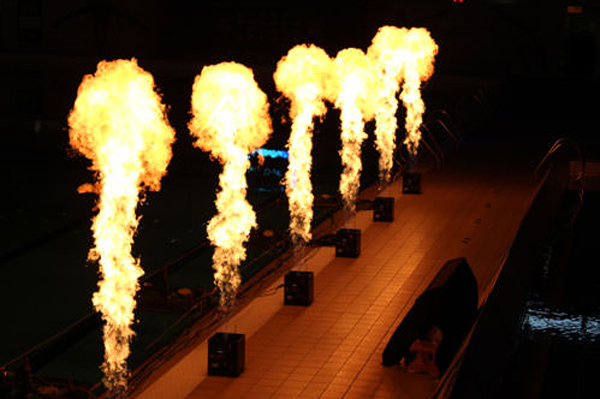 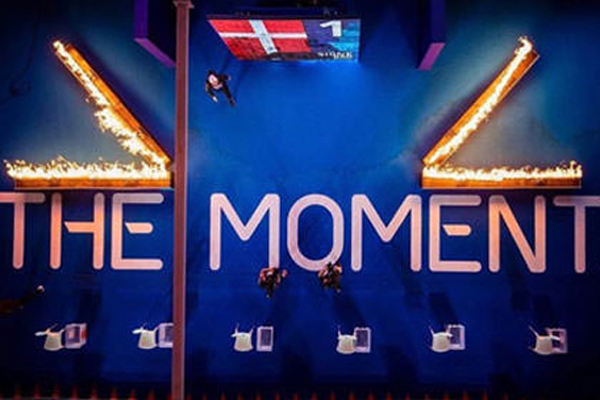