In 2019 Leeds celebrated their centenary and wanted to mark the day for all their fans. One of their ideas was looking to recreate an old iconic photo where all the players stood in a line in front of the fans.

This event was produced by our friends at The Sports Presentation Company and they recruited us to provide the Special Effects elements.

The first challenge we faced was one regarding the event activation – specifically the timing. Leeds were very keen to focus the celebrations around the end of the game, but we pointed out that it might not be appropriate to have big celebration if the team have just lost or even drawn the game.

Providing pitch activation is also much harder post-match because there are players all over the pitch and there is a delay in firing because we have to move all our equipment onto the field of play. The best option for firing SFX post-match is from the roof as it can all be pre-rigged and can fire right on the final whistle. Leeds had requested roof pyrotechnics, but unfortunately, the game in question was to be played during the day and we advised against roof pyro because it’s not visible unless it’s dark.

We attended a site visit at Elland Road to meet with the client and to inspect the roof access and potential firing locations to assess what was possible. The roof access was quite challenging – the stadium is relatively old and one roof has been closed off completely for health and safety reasons. We always try to create symmetry in our displays, so in this case, this left us with the two longer sides of the pitch. One side of the stadium has undergone a large scale renovation so it’s at least twice the size and height of the other.

We managed to identify an alternative firing location within the stand on top of the corporate boxes. The only issue being, would our streamers obscure the view of the fans sat behind? The answer was yes. We were very keen to fire form this location though, so we constructed some bespoke streamer firing cases which laid very flat and didn’t interfere with the fans view of the pitch.

The team entered onto the pitch through a guard of honour, which featured 4 branded Flame Jets at the end of the line. The players then all walked over to stand in a line in front of the main stand to replicate the famous photo. A large mosaic was displayed by the fans featuring a huge 100 in the team colours and we fired a flurry of pyrotechnics to add an extra moment of glamour to the day.

The match was a tense affair, Leeds were top of the table but a resilient Birmingham side frustrated them for long periods of the match. Leeds took the lead and missed several chances to put the game to bed. The pressure mounted as the game came to a close but the team held on for a narrow but well deserved 1-0 victory.

As the game finished an announcement was made over the P.A. system about the 100th anniversary and at a key moment, we fired the huge blast of gold and blue streamers which covered the length of the field. 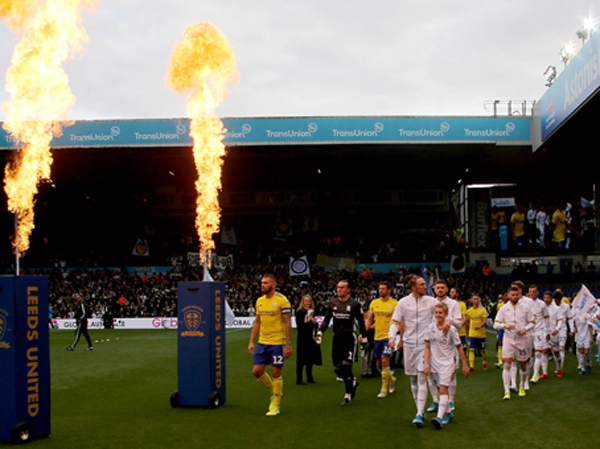 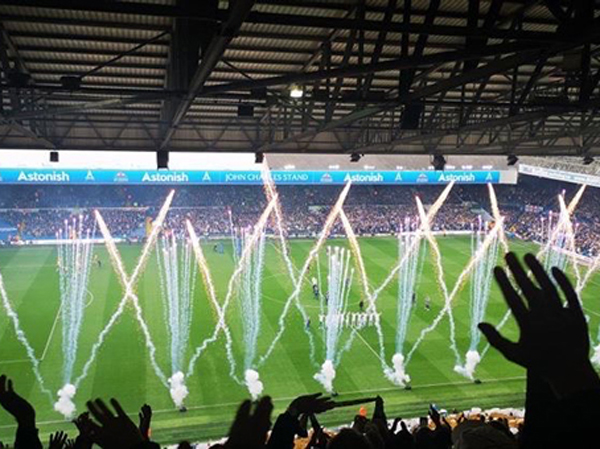 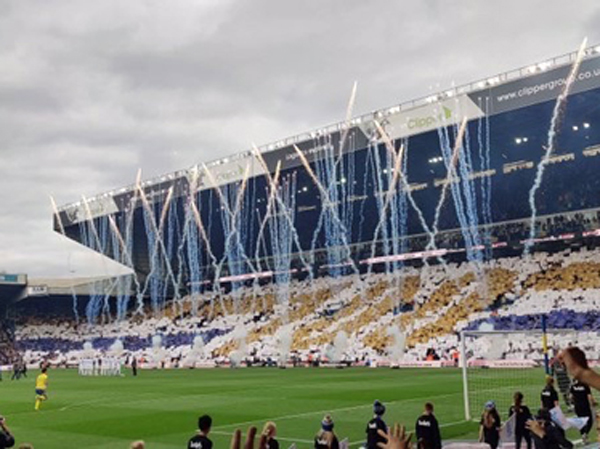 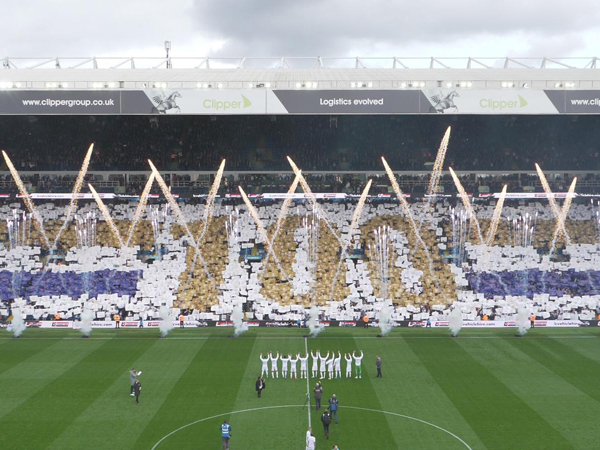