OK Magazine invited a celebrity-filled guest list to their exclusive 25th anniversary event. Where better to hold a glamorous party than the amazing viewing platform at The Shard – Europe’s tallest building?

Our client was installing a pop-up Prosecco bar at the party for the Gancia and they wanted to utilise our Bubble Tubes to attract some attention to the brand. The product was a perfect fit for the sparkling drink, so our qualified team setup four tubes, two either side of the bar.

Usually, installing four bubble tubes would go down as one of our easiest installations. However, on this occasion, it was anything but that.

The viewing platform is open all day to the public and it only closed one hour prior to the party, giving our team and all of the other event suppliers a very short window in which to set-up.

Our team arrived at the Shard early to get our bearings and quickly discovered that the route to the venue was not as simple as had been described. We had to navigate our way up sixty-eight floors via three lifts – not to mention a final flight of stairs at the top in order to reach the summit.

In order to reduce installation time, our team took one hundred litres of water with them in four large barrels (due to the weight, we couldn’t carry any more). This enabled us to fill two bubble tubes, ensuring that we would have one tube on either side of the bar.

We managed to make it to the 68th floor after about twenty minutes. The first two tubes were filled quickly using the barrels and we were on track. We then located a small kitchen on the floor below, where we could refill the barrels and commence filling the final two tubes.

Just as we finished filling the final tube, a security guard tapped us on the shoulder and told us it was time to leave – the doors to the party were about to open. The team had managed installation just in time, jumping in the lift and returning the kit to the van. At 01:00 when the party was finished, we completed the task in reverse! 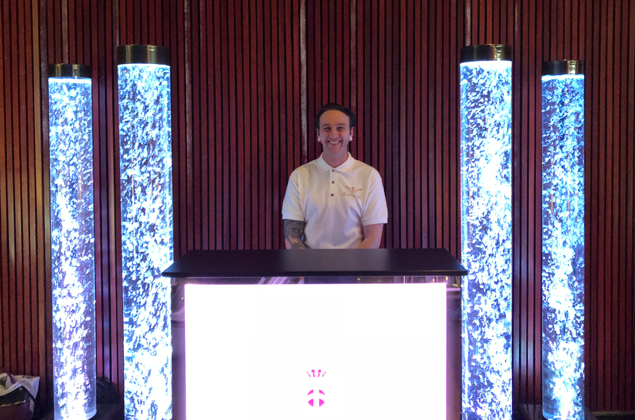