Around 40,000 people flocked to the streets of Paisley to celebrate its biggest ever Halloween festival. They were treated to a playground of amazing floats, circus performers and a spectacular Mardi-Gras style parade featuring 350 costumed performers.

Another spectacle of the festival was the dazzling performances from aerial artists, All or Nothing, who performed their death-defying act ‘Into the Dark’. The performance saw the artists take to the skies to circle and swirl around a haunted carousel over the grounds of the town’s iconic Abbey.

The challenge on this job was the unknown – the brief was to provide Flames and Pyrotechnics at 2 different sites on opposite sides of the town. We would have to make several trips back and forth through a pedestrianized area packed with thousands of people and operate in sites completely unknown to us.

We were also asked to assist in operating a guitar flame thrower which would be fired by a clown riding a mechanical elephant. We always try to go the extra mile to help our clients and so we agreed to do as much as we could, but we were operating a little outside our comfort zone.

We had been recommended by another SFX company to the client and we discovered that they had built the guitar flame thrower and it used the same technology as our G-Flames.

We were given an explanation of how the device worked and told that we would be operating the safety shut off control from the ground while the operator rode on top of the elephant, so this gave us some confidence of what to expect prior to arrival.

We also arrived on-site 6 hours in advance of the show, so we had plenty of time to get set-up and take a good look around the site and establish the quickest ways to get around the town and avoid the crowds.

The event was a tremendous amount of fun – it’s jobs like this that make all the hard work and travel worthwhile.  It will go down in the Top 5 jobs we’ve completed.

First up was the Parade where we operated the flame thrower, which also involved refueling the guitar 3 times by climbing up and down the side of the elephant.

The second stage was firing flames on the steps of a beautiful striking Thomas Coats Memorial Baptist Church as a backdrop to several performing acts.

The finale piece was back at the 12th century Abbey where a huge 100-ton crane suspended a performing act high above the crowd. We fired a pyrotechnic water fall showering sparks down from beneath the spinning acrobats. We also had a line of flame jets and pyro on the floor, and we lit up the Abbey to end the show and event in spectacular style. 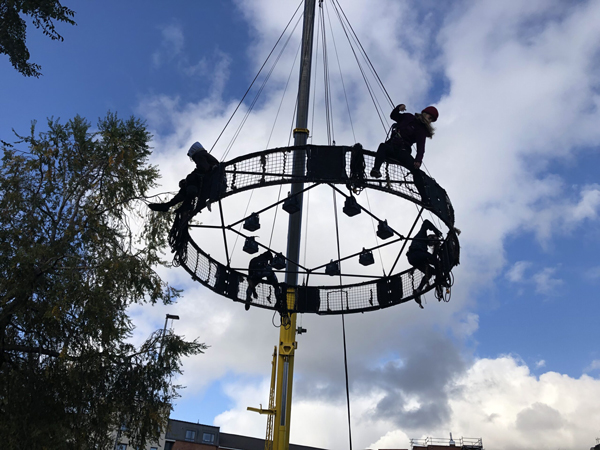