Two of our favourite jobs were at the BRIT Awards, so when the phone range for the third time in five years we were really intrigued to see who required our services on this occasion – previously it has been Stormzy and Paloma Faith.

This time it was Pink, who was being honored with the award for ‘Outstanding Contribution to Music’ and she would be the last act of the night, taking to the stage for a special ten-minute performance. The production would include a medley of five different songs and we were to feature in the 4th of those.

Our previous two visits to the BRIT Awards were to provide Rain Effects, whereas this project was slightly different. Pink was working with Freckled Sky, a multimedia company that specialises in digital special effects,  including projection mappings. They leapt to stardom after an incredible Golden Buzzer performance on America’s Got Talent. The act involves a Water Projection where moving images are synchronized with the performers.

The whole project would last 10 days, with 6 days of rehearsals at another location before moving to the O2 for the full show run through and live performance.

Our previous two set-ups had involved water storage tanks on the ground, under the stage. Water was then pumped up 25m into the grid and then it would fall back through the projection screen and into a catchment tank on the stage. The drawback of this option is the length of time it takes to pump the water all the way up – we must back-time it and turn the pumps on circa 20 seconds prior to the water being required in the performance.

Due to the set-up of this year’s show, this was not possible, so we had to come up with an alternative solution.

The shock of cold water falling over an artist would likely cause them to flinch, so the water had to be heated to ensure it didn’t compromise the performance.

We presented a new solution for the water supply – better in many ways but it relied on the skill and cooperation of the rigging team. Our suggestion was to store the water up in the air, suspended on a truss. This eliminated the back-timing issue and meant we could instantly produce the water screen on request.

We carefully calculated the amount of water required for the length of the performance including rehearsals (1,500L of water split across three separate tanks). When you included the tanks, six pumps (three required and three back-ups) and hoses, the total weight was close to 2 tonnes – a huge figure! At first, the rigging team were reluctant to get onboard – their existing truss was not strong enough for the job but the production team pushed them to make it happen. They bought in an extra-large truss, did all the math’s and agreed it could be done.  It was a tense moment, but the mass of water was lifted safely into the roof.

We’ve always heated water for similar acts like this, but that’s when we’ve had the water supply on the ground where we can closely monitor the temperature and adjust the heat accordingly up to the last minute. With our new solution, the water needed to be pumped into the tanks well before it was going to be used – circa 6 hours. We, therefore, had to overheat the water much more than it was required so that it would then cool to the desired temperature range during the show, as we were the last act on.

Pink’s entire act was absolutely phenomenal. Her set began by her being lowered down from the ceiling onto the stage. There were Special Effects throughout the performance with Pyrotechnics, Flames, Smoke and Lighting.  Despite all the successful practice runs, the pressure was still on as our section approached.

We received our cue and pressed the button to start the pumps. After 2-3 seconds, the water was flowing at full speed and the projection was about to start. The temperature of the water was perfect and the live performance went off without a hitch and Pink certainly ended 2019 in style like the legend she is. 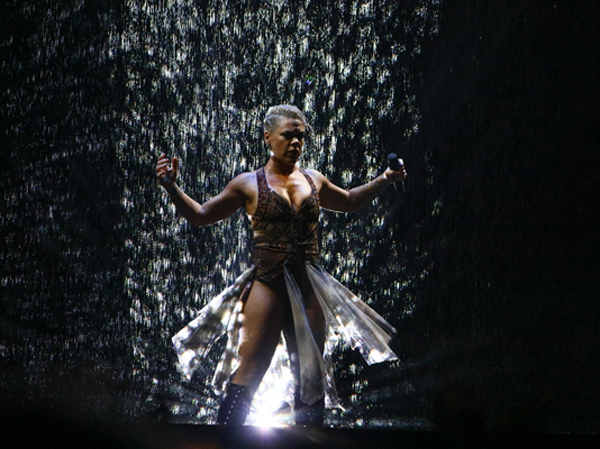 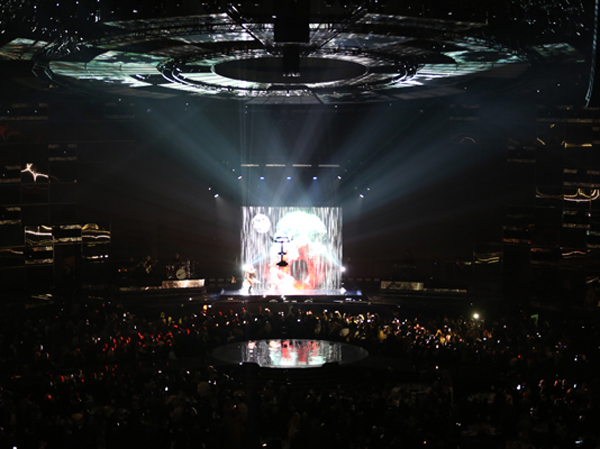