We have worked with Saracens for several years providing special effects for their key European home fixtures at Allianz Park.

For one special game each season the club play one of their Premiership home fixtures away from Barnet and instead take over a much larger stadium to create a big showpiece event. The event is a form of marketing, utilising the larger capacity ground to attract new fans who will hopefully enjoy their day out and return again in the future.

Previous events had been held at Wembley, but Saracens moved the spectacle to The London Stadium this time.

The client was really keen to add some different elements to this years events and was very keen to include some pyrotechnics fired from the roof. Unfortunately, the game was during the day, when aerial pyrotechnics are not very visible so we advised the client that it wasn’t the best option.

The main aim of special effects is to help build the atmosphere and excitement prior to the match. This can be achieved through visual but also audible effects such as crackles and bangs. For this reason, we suggested a product called an AirBurst, which creates a spectacular, bright, ball-shaped flash followed by a burst of spherical sparks with a loud bang.

Airbursts are designed to be suspended above the ground so our team identified an aerial walkway running the entire way around the stadium, just inside the roof. This was a perfect place for us to suspend the airbursts above the crowd.

We visited the stadium with the client to complete a test of the product as the council had concerns as we were proposing to fire these items directly above the audience.

Following the demo, the client loved the effects and the council were happy with our approach so we got the sign off.

We designed the pre-match entertainment to commence with the Airbursts, rigging them around 3/4 of the stadium roof. The effects started either side of the players tunnel and we then fired them in a chase sequence where the bangs whipped around the roof in quick succession until they met in the middle on the far side.

Then as the final Airburst boomed, we lit the flame effects which burst up from all around the pitch. As well as adding the Airbursts, we had upgraded our flame offering for the match with seven of our huge 5-Way flame machines on all sides of the pitch. We also utilised the flames during the game to fire at key moments. Flames were positioned just beyond the try zone that Saracens were attacking and we fired the flames when they scored, as you can see in the image below. 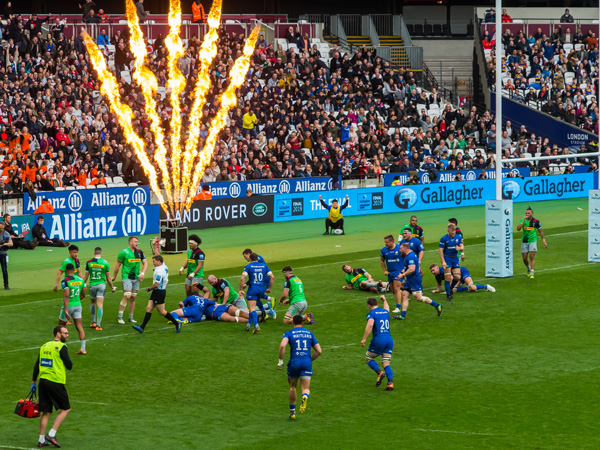 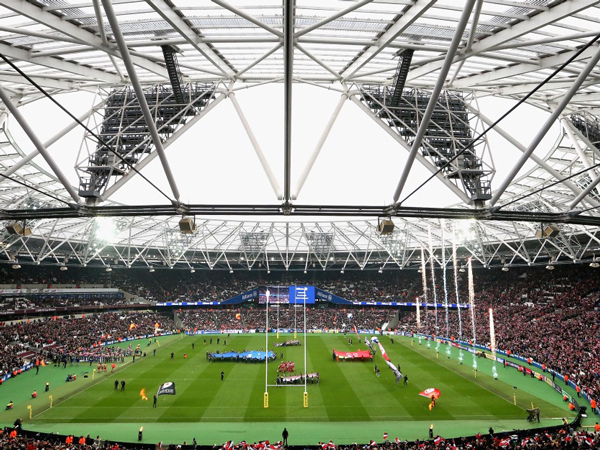 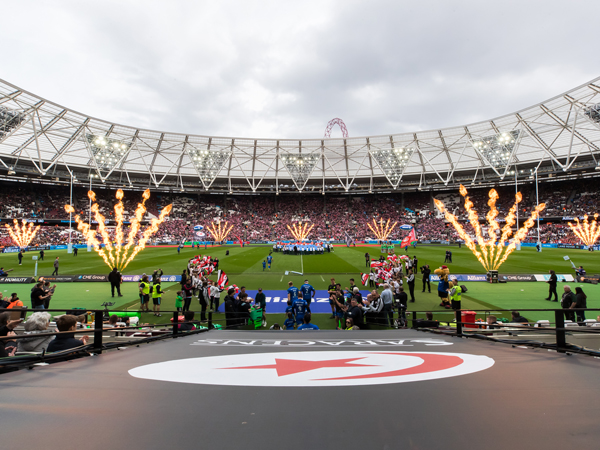