In line with the ever-increasing viewer ratings for TV shows and live events, Ultimate Strongman has grown to become hugely popular in the UK. Over the years, Strongman’s organisers have been busy building different event formats including team and inter-country competitions, and CO2 Effects have been used to provide further audience engagement.

Last year, the UK’s strongest man came to St Alban’s for the first time and saw over 10,000 spectators.

Our client had requested an entrance feature – they wanted the strongmen to appear through a cloud of smoke as they walked into the arena. We had previously tried using a traditional Smoke Machine, but these are easily affected by the wind, and this particular event would take place outdoors.

We swapped the Smoke Machine for two powerful CO2 Jets which were originally designed to fire vertically (up to 6-8 metres in height).

On this occasion, rather than creating a tall jet of smoke, the Entertainment Effects team positioned the nozzles so that they fired horizontally, directly towards each other (reaching around 4 metres). As the two air masses hit each other, the gas would disperse and make a large cloud of smoke.

Our specialist team were also on hand to provide Flame Effects at the entrance and throughout the event, as well as Metallic Streamers for the trophy presentation.

The Strongmen waited in the wings, out of sight from the crowd. As their names were announced and they were welcomed into the arena, short bursts of gas were fired to fill the entrance area.

The smoke was thick and the audience weren’t able to see through it. As the Strongmen moved into position in the centre of the entrance, the smoke then cleared to reveal the contestants to the cheering crowd. 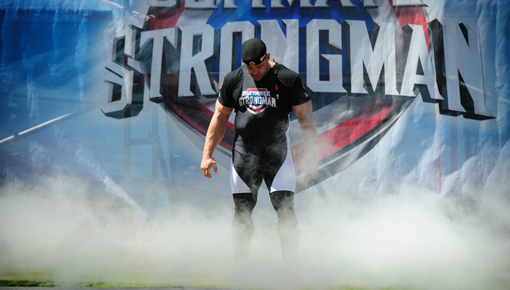 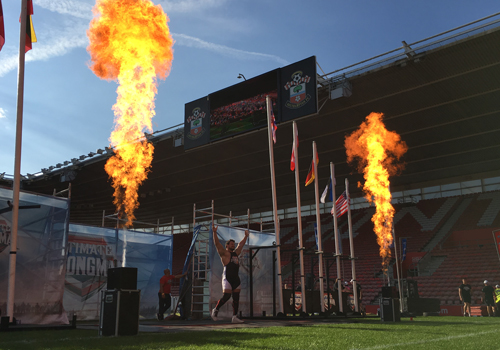 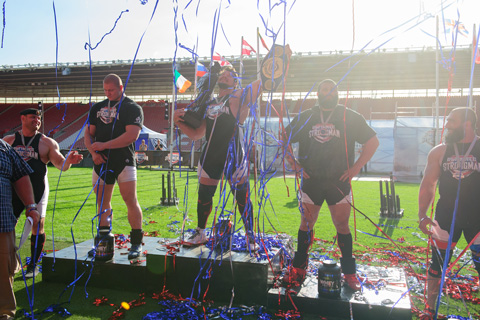