The launch event took place in Manchester with players from both the red and blue sides of the City coming together to test the latest innovation in football boots.

The new boot is based on the idea of tailoring specific areas of the boot to allow the player to use each part of the Predator most effectively. The five parts – or Lethal Zones – focus on Pass, Dribble, Sweet Spot, Drive and First Touch. The players took turns to see who could complete the challenge in the shortest period of time.

Entertainment Effects developed the Dribble Challenge by building an indoor fountain that contained several vertical coloured jets of water, creating a course which the players had to dribble through.

A large tank was built and covered with a grated steel deck before being covered in AstroTurf. The jets were then fired through small holes in the deck and illuminated with individual lights positioned directly under the jets.

Our Bespoke Water Special Effect created a tight and twisting obstacle for the players, who were more than up to the task of guiding the ball through seamlessly. The football challenge provided an opportunity for them to show off both their skills and close control, aided by the excellent Predator Boot. 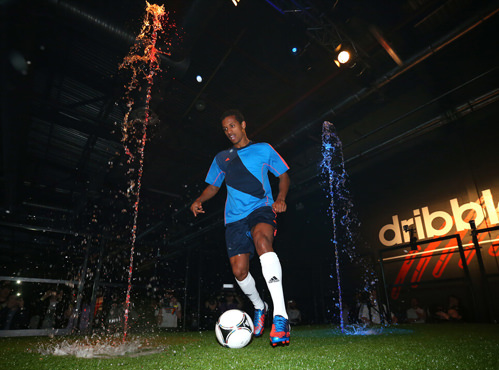