We were contacted by the Enterprise Manager at Winchester Cathedral who was looking to enhance the launch event for the opening of the ice rink and the Christmas market. The event would involve a number of skating performances on the ice and the client wanted to add a bit of glitz and glamour and make a point of difference from previous years.

We proposed our Sparkular which fit beautifully with the Christmas environment.

The first challenge which is common with many new jobs was establishing if we could operate safely in the space provided. We usually like to complete a site visit wherever possible, but when we first starting discussing the project, the ice rink had not been built so this wasn’t possible. The next best option was to work from scale drawings which were provided to us.

It was apparent quite quickly that due to the location of the audience, the only space available to safely operate our equipment was on the ice itself. This was not without issues either due to the skaters performing as well as the requirement of power and control cables running across the ice.

The ice rink at Winchester Cathedral has a gorgeous tree in the middle, and the client wanted something to attract attention to this.

We also had to consider the safety of our operatives on the ice, to ensure they did not slip and hurt themselves.

There was also a marquee covering the rink and some hanging decorations, so these were other factors which we had to consider based on the product choice and positioning.

We proposed two possible locations for the products – one in a line along the far end of the rink and two around the central Christmas tree. Both locations would enable us to run power to the machines without having any cables crossing the ice, specifically the central location as there was already a power supply for the tree lighting.

Our Sparkular Mini’s have wireless functionality so we could use them in the middle to overcome the issue of running a control cable between the units and the operator.

The client approved both locations, which included agreement on a safety perimeter which would need to be maintained around the units. We requested that all the performers be clearly briefed on this – we informed them during their practice session whilst also demonstrating the product.

The staff working the Skate Hire counter kindly provided us with some overshoe ice grips to enable us to safely walk on the ice to set up our equipment.

The Sparkulars along the back wall filled the space with a gorgeous bright white glow. This combined with some chase sequences as skaters flew past made it a spectacle to behold! The Sparkular Mini’s in the middle illuminated the tree and helped to add depth to the effects. 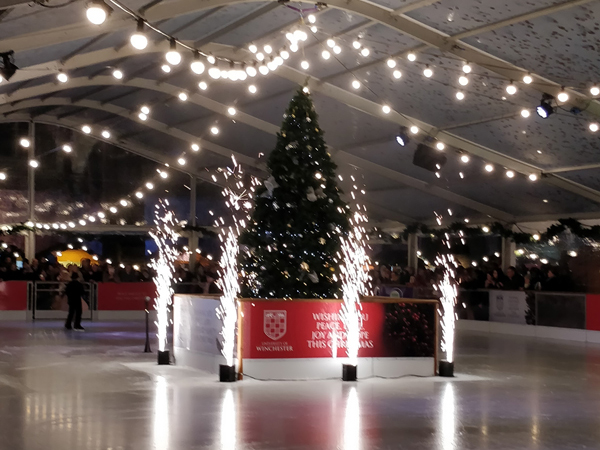 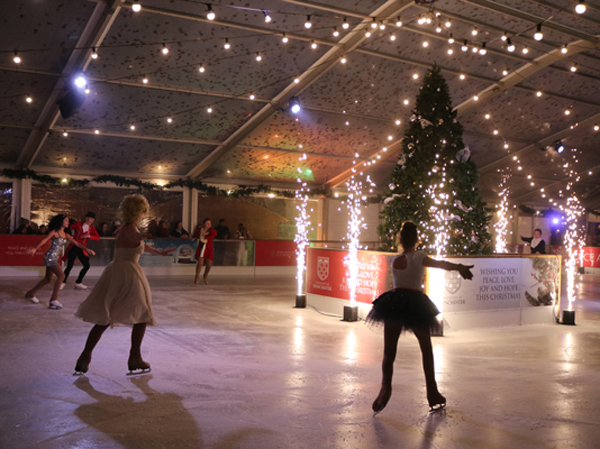 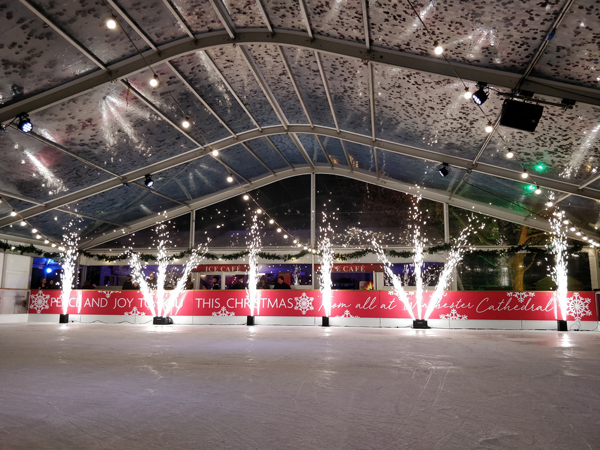