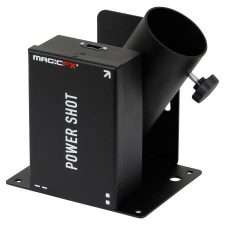 The Magic FX powershot has everything you need to create a breathtaking confetti effect.

The Powershot heads will enable the synchronised firing of two (or more) confetti cannons at the same time via a push button controller.

The kit comprises of:

We supply a separate fire control unit as we do not recommend firing the heads from a DMX desk. They will work via a DMX desk, BUT, if the power fails to the desk and is then switched back on it sends a test signal down every channel which is enough to fire the cannons!